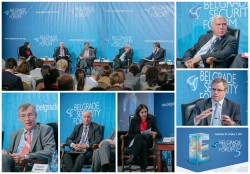 A debate on what Germany should became inspired today’s session titled Germany: The Reluctant Leader of Europe. Speakers talked about German roll in Europe from perspectives of different countries, but discussed the bigger picture as well and Germany’s global presence.

It was clear to our speakers that Germany had unique position in Europe and could play an important roll but only in partnership with other member states and the EU institutions. Compromise is important to Germany and it could easily facilitate the discussion and bridge the differences.

At the same time, on the global level, finally the United States are not looking for partnerships only in UK and France any more, but also recognize Germany as a stabile partner which is opening new possibilities, bilateraly and multilateraly. Some participants expressed their wish to see Germany back on multilateral track.

When it comes to personal level, the deficit of leaders throughout Europe is evident, however it just so happens that one positive example can be found in Angela Merkel who our panel saw as a person of soft charisma doing things that have to be done.