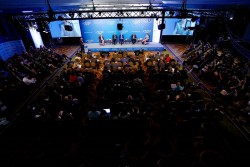 The Belgrade Fund for Political Excellence, the European Movement in Serbia and the Belgrade Centre for Security Policy are organizing the Sixth Belgrade Security Forum that will take place from October 12 – 14, 2016 under the working title “Will Democracy Survive the Global Disorder?”

With the preparations for the 2016 edition of the Belgrade Security Forum well under way, several trends bring us great concern. What used to be the international order is not functioning anymore. The threat of interstate conflict – lessened by the advent of security cooperation – has made its grand return in the backdrop of the resurgence of violence in the Middle East. The EU – a destination for thousands who had to leave their countries – has yet to reach an agreement to be endorsed by all its members on how to address the migrant crisis. Whether the agreement is reached or not, migrants will continue to traverse the region of South East Europe, which remains troubled by internal instability and a hostage to common recurrences of populism.

Faced with these challenges, democracy suffers. “Arab Spring” of broken promises has transitioned into permanent “winter of our discontent” as modern radicals collide with authoritarian regimes. The spillover effects of this conflict have spread across European soil, fostering discord between political elites and the citizens, with legitimacy gap growing ever wider. Thus, attacks on the freedom of the press and eroding of civil liberties have become a norm in transitional societies we thought were being transformed by the EU.

In these circumstances, populists of all colors have flourished. They offer radical counter-arguments to the political mainstream, of which many have grown tired. In the aftermath of tragic events, they are the ones setting the tone of debate. Seductive and emotional, they build their case on the fear – of the rising cost of education, of unemployment, insecurity – while offering no plausible solutions and alternatives of their own for societies’ most pressing issues. We therefore, remain concerned:

Should we fear the populist surge?

Can European values survive current security dynamics? How can we reaffirm them?

If governments fail, will civil society be able to “save the day”?