The Session 4 “EU Enlargement – Picking up the peaces” discussed messages sent by European officials regarding the future enlargement policy and the possibilities for the region to grab hold of the momentum for pursuing its mission towards the EU membership. 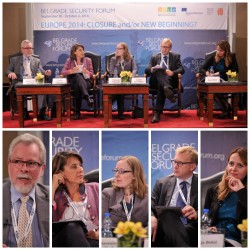 In the light of debate is the EU enlargement policy a priority or not, there are two lines of arguments, one stating that skepticism of citizens and politicians of the EU is on the rise but the EU is still committed to the issue, and the other saying that EU is centered on its own crisis thus making the enlargement not a priority.

The skepticism of Europeans towards further enlargement should be also carefully taken care of. Huge responsibility lies on the very candidate countries who should work on resolving important national issues.

The session was conducted under the Chatham House Rule.