The crisis in Ukraine inspired the debate on ensuring energy security in a hypothetical scenario in which there would be no more energy delivered from Russia. The Morning Session 5 Rethinking Energy Security: Balancing Concerns, Managing Expectations concluded that Europe has sufficient other sources to obtain energy from. 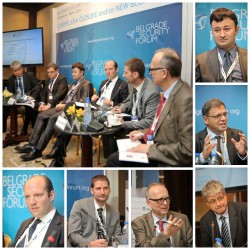 Replacing coal with gas as a main energy resource as soon as possible was seen as critical for both energy stability and environmental protection. The key to energy security was energy efficiency, which is something Serbia and other countries of the region have been lacking extremely.

It was interesting to observe how the prices of gas on markets remained stabile even in 2009 when Ukraine shut down gas transport; however, markets were much more affected by the Fukushima catastrophe.

Questions that remain to be answered are most definitely the overcoming of energy interdependence and preventing Russia putting even more pressure on Ukraine. Thus, the South-Stream was also argued as a potential threat to Ukrainian stability; although its importance for the Europe was noted. It might not change anything for the European Union, however some of the West Balkans countries could profit from it.

Morning Session was conducted under the Chatham House Rules.