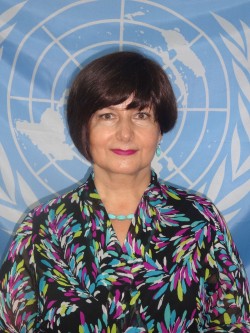 Simona-Mirela Miculescu has been the Representative of the UN Secretary-General and Head of the UN Office in Belgrade since July 2015. Prior to this, she was the Ambassador Extraordinary and Plenipotentiary, Permanent Representative of Romania to the United Nations between 2008 and 2015. During her 24-year diplomatic career, she has served as Spokesperson for the Romanian Ministry of Foreign Affairs, as Senior Media Advisor to the Minister (1993 and 1999), as Director of the Press Department within the Ministry of Foreign Affairs (1994 and 2008), as Press Secretary of the Romanian Embassy in Washington D.C. (1994-1998), and as Senior Public Information Officer at the OSCE Mission in Kosovo (1999-2000). In 2006 and 2007, as part of Bearing Point, she acted as Senior Advisor for Public Outreach to the Government of Iraq, within a USAID-funded project. Between 2000 and 2004, she was Foreign Policy Adviser to the President of Romania (with the rank of minister), becoming the first woman in the Romanian diplomatic history to be granted the rank of Ambassador.

All session by Simona Miculescu