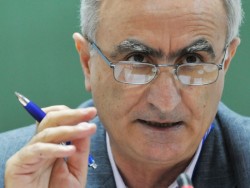 Remzi Lani currently serves as Executive Director of the Albanian Media Institute. He spent nine years (1983-1992) as Chief Editor of Zeri i Rinise newspaper, followed by three as Media Coordinator at the Soros Foundation. Lani is also currently editor of the Alternative Information Network in Tirana and is the first President of the South East Network of Media Centers and Media Institutes, which brings together 17 organisations in the SEE region. He is a founding member of the first Human Rights Group in Albania (The Forum for Human Rights). Lani has written widely on Balkan affairs for local and international newspapers and magazines such as: The Guardian, London; Quimera, Barcelona; El Mundo, Madrid; The International Spectator, Rome; Futuribili, Trieste; Fokus, Skopje; Naša Borba, Belgrade; Vreme, Belgrade; Oslobodjenje, Sarajevo; Monitor, Podgorica; War Report, London; and Transition, Prague. Lani has worked with the Aspen Institute in Berlin, the Istituto Affari Internationali in Rome, CESPI in Rome, the Center for International and Strategic Studies in Washington, the Carter Center in Atlanta, and the Hellenic Foundation in Athens on a range of Balkans-related projects. Currently, Lani is a Member of the Advisory Board of the Balkan Trust for Democracy and is a Member of the Steering Committee of GFMD (the Global Forum for Media Development). He also sits on the board of WAN (the World Association of Newspapers).

All session by Remzi Lani