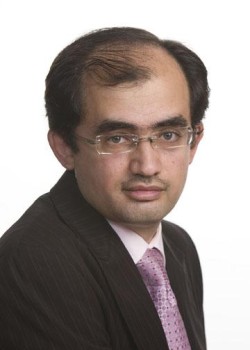 Radwan Ziadeh is a Senior Fellow at the U.S Institute of Peace in Washington D.C, and Fellow at the Institute for Social Policy and Understanding (ISPU) in Washington D.C. Since the start of the Syrian uprising on March 15, 2011 involved in documenting all the human rights violations and testifying at the UN Human rights council in Geneva, also involved in the opposition activities – elected as director of Foreign relation office for the Syrian National Council, the main umbrella for the Syrian opposition. He was most recently a Visiting Scholar at Dubai Initiative at Kennedy school of Government at Harvard University. He had previously been Reagan–Fascell Fellow at National Endowment for Democracy (NED) at Washington D,C and Visiting Scholar at the Center for the Study of Human Rights at Columbia University in New York City, and also a Visiting Fellow at Chatham in London. He is the founder and director of the Damascus Center for Human Rights Studies in Syria and co-founder and executive director of the Syrian Center for Political and Strategic Studies in Washington, D.C. He has lectured at a number of universities in worldwide, including Harvard University and Columbia University, and is a frequent political commentator on several U.S., European, and Middle Eastern media outlets such as Al-Jazeera, Al-Arabiya, B.B.C. and Al-Hurra. He also writes a bi-monthly op-ed for the leading Arab daily, Al-Hayat.

All session by Radwan Ziadeh

Plenary Panel 2: The Consequences of the Crisis for Human Security at Home and Abroad (in partnership with UNDP/SEESAC)