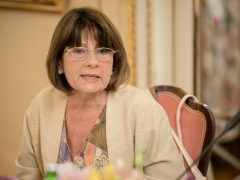 Jelica Minić, PhD, is a Vice-President of the European Movement in Serbia. She has a background in research and policy making in European integration affairs and regional cooperation. She was the Deputy Secretary General and Head of the Expert Pool of the Regional Cooperation Council in Sarajevo (2008-2013) and held high management positions in the state administration (Assistant Minister of Foreign Affairs, 2000-2004), NGO (Secretary General of the European Movement in Serbia, 1994-2000) and academia (1971-2000 and 2006-2008) as consultant or team leader for projects of the UNDP, the German Marshall Fund in Serbia, and the European Integration Fund of the European Agency for Reconstruction. Besides teaching different courses, she regularly gives lectures on regional cooperation in South East Europe and EU Enlargement Policy at the Diplomatic Academy of the Ministry of Foreign Affairs of Serbia. She has published over 170 articles, essays and book chapters, around 60 conference papers and edited several books and reviews.

All session by Moderator: Jelica Minić