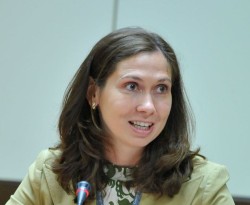 Barbora Maronkova graduated from the Faculty of International Relations at the University of Economics, Bratislava, Slovakia in 2002. She then established and headed a Slovakia-based NGO, the Centre for European and North Atlantic Affairs, thus contributing to the public and academic debate on Slovakia’s membership of the EU and NATO from March 2003 to February 2006. From 2003 to 2005 she was actively involved with the Euro-Atlantic Security Study Group, the PfP Consortium of Defence Academies and Security Studies Institutes in Garmish-Partnenkirchen, Germany. Since September 2006, she has worked with the Public Diplomacy Division at NATO HQ in Brussels, Belgium as Information Officer for the Western Balkans. She also closely follows trends in public diplomacy and strategic communications and was recently appointed as Action Officer for an Impact Assessment Study of NATO’s public diplomacy.

All session by Barbora Maronkova