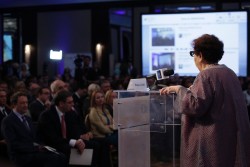 The welcoming speech at the Grand Opening of the Belgrade Security Forum 2016 was done by Sonja Licht on behalf of the BSF Steering Committee. She said that this event, the meeting of PMs Vučič and Rama at the Forum could not be expected five years ago.

’We never dreamed that would be this interest in the region’, she said. She stressed the high points of relations between Serbia and Albania, from flow of optimism in the beginning, to many challenges that appeared in the meanwhile.

The EU integration process, according to her, has started to face many challenges and this slowing down of the process is generating a lot other crisis. ’What Europe and the Middle East understood’, she said when refering to the migrants crisis, ’is that the the Balkans is closer to them that they thought’. But these crisis, she said, are an opportunity for the region to take care of itself. ’The region is more or less left to itself at the moment’ she said, “we need to rely on each other, this is our only strengh.” Licht praised Western Balkans as most successful post-conflict region, but stressed that there was a need for new ideas, courage and leaders.

She finnished by saying that Rama and Vučić are the two leaders that are expected to be champions in this new stage in the region and welcomed everyone at the discussion table of the Forum.