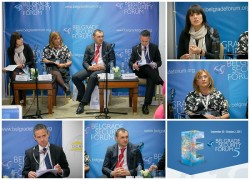 The Session called Privatization of Security in Transforming Societies – Main Challenges to Democratic Governance focused on the mechanisms of Private Security Companies and state actors working together to ensure the delivery of quality security. Some of the questions that have been raised were whether states know how to provide private security; who are private security actors; and what were the positive concepts of cooperation between police and private security actors.

Geneva Centre for the Democratic Control and Armed Forces (DCAF) with its 4 regional partners investigated private security situation in the region. The first product of that cooperation is the “Force for Good’’ publication. Rositsa Dzhekova said that there are some guidelines and certain codes that could help countries in this region adopt private security. She compared situations in this sector as well as their problems, and gave very thorough insight in the current situation.

Nataša R. Ignjatović emphasized that in Republic of Serbia there was legislative regulated private sector for the 20 years. Training, licensing and oversight are all the aspects that are regulated in the new Law awaiting implementation.

Branimir Bekić considered having this Law provided opportunity to make sure that service provided by the private security company was monitored in the right way. This is important from the security aspect, but also from the quality of service point of view. Lowest price is often the only way companies decide between service providers.

Poverty could be a problem for setting minimal standards for the provided services. Moderator Alan Bryden summarized this discussion with several recommendations and conclusions. Monitoring and control are important, but Ministry of interior cannot be the only institution in charge – some part of control should be conducted by the parliament and other institutions. Setting minimal standards for security companies and their practice is the way to deal with the economic part of the problem.