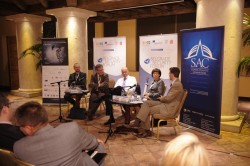 Since its establishment twenty years ago, the Visegrad group has become a regional leader in providing assistance both through the advisory role and the International Visegrad Fund; hence their knowledge could be applied to the Western Balkan countries. According to the speakers, the Central European countries are the closest neighbors to the Western Balkans, and it is expected that the help comes from them first.

The key questions for the speakers were the differences and common grounds of Visegrad group and Western Balkans, as well as the values that V4 could provide to the Balkan countries. Participants agreed that the Visegrad group could use their own experiences in helping Western Balkan countries in the process of accession. Protective relations towards the countries of Western Balkans, according to the speakers, open the door to intensive economic and energy cooperation and, acting together as an influential group. V4 is known to be the most inclined to the new EU member states (e.g. Slovenia, Romania, Bulgaria).

One of the questions addressed the difference in the process of Euro-Atlantic integration between Visegrad group and other countries like Austria or Spain, for example. The answer was short and concrete – transition. Experiencing transitional problems, contradictions and tensions, as well as overcoming them, these four countries therefore make valuable role models for the Western Balkan states, enabling them to approach the EU more quickly.

Besides the advisory role, V4 support consists of another element as well – the International Visegrad Fund. Czech Republic, Slovakia, Hungary and Poland are investing equal budgets to finance the projects of the EU candidate countries (Belgrade Security Forum itself is partially supported from this Fund). It was noted that in order to maximize the benefits of this Fund, the proposed projects need to be transparent and well organized, secured from the corruption, but above all strong and promising, with significant reach and impact.