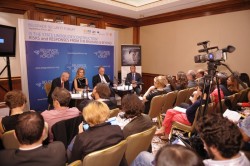 The Western Balkans faced different challenges in the last two decades, such as ethnic and religious disputes and economic crises. The speakers agreed that the situation had improved, but that it was still far from the “European normality”. They stated that regional cooperation is a responsibility of regional actors, but that the external actors are still crucial for the cooperation.

Since the countries of this region share the same Euro-Atlantic perspective, the speakers concluded that they need to improve regional cooperation as an essential element of the association to the EU. The conclusion is that economic cooperation remains as the vital element for the normalization and stabilization of the Western Balkans, since poverty, unemployment and corruption are the main challenges in everyday life.

Stabilization of the region is not possible without the reconciliation. However, the reconciliation from the ground level is almost impossible to accomplish – stereotypes, prejudices and distrust among ethnic and religious groups are common. The participants suggested that political and nonpolitical actors (such as media and the church) should take part in the reconciliation process, which would certainly be long and painful, but possible.