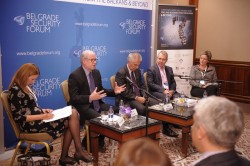 What is the influence of the global economic crisis on today’s modern states? What are the results and the perspective of the EU response to the emerging economic challenges within the current political circumstances?

It was agreed that the crisis in the EU and the USA happened mainly due to the mismanagement in the financial sphere. More specifically, it was highlighted that albeit the rules of the system were properly designed, they were not properly implemented, indeed were constantly violated. The massive imbalances between different European regions, the lack of mechanisms to deal with such regional discrepancies and EU’s failure to act as a “united entity” had rendered the Eurozone crisis unavoidable. Also, it was concluded that mechanisms for anti-crisis policies within the EU could not be that efficient with massive imbalances between different European regions.

One argument claimed that the economic crisis did not cause a major impact on political legitimacy of the present regimes’ thanks to the endurance of the global democratic system. A counter argument, however, underlined that the systems have faced substantial loss of ‘democratic accountability’ due to the lack of trust in the political institutions. It is noted that the relationship between the state and the individual will be significant factor in defining the shape of the future economic institutions. Whereas the state presumed the patriotic behavior of the individuals, their loyalty became more and more pragmatic in a more globalized world. The austerity policy impacts were also reviewed and it could be heard that it didn’t accomplish any stability in the Eurozone, which is stuck in slow growth.

The current political agenda that focuses only on achieving growth was criticized. It was concluded that every European country has to become aware of its own mistakes and responsibilities in order to properly respond to the economic crisis in Europe.