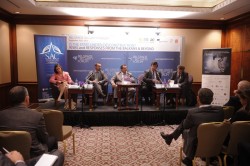 The main focus of this panel was on the future NATO, in particular, is NATO relevant in the times when non-state actors on the international arena, such as NGOs and Civil Society, have ever greater role.

It was declared, that NATO does not perceive these actors threatening to its influence, but more as partners. Due to the values that NATO stands for, states seek to enter the Alliance for its values, mostly democracy, as well as security granted with article 5. On a regional scale, NATO has a specific role of integrating countries, and helping them develop their armed forces. Finalizing the panel, it was clear that NATO, due to its flexibility, and ability to cope with the new changes on the global field, is still a very capable organization on the global scale.