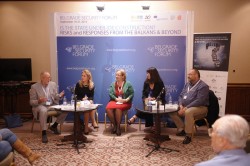 In this panel, the participants discussed not only the reasons, the symptoms and the consequences of corruption and informality, but also aimed to bring up certain policy recommendations on the matter.

It is commonly agreed that the corruption more or less exists in all societies and governments,  yet in the Balkans it particularly remains a major concern with extremely huge social and economic costs. It is noted that the corruption could be in different forms: from petty bribery to grand corruption and from patronage to state capture.

It is argued that main steps in fight against corruption should be directed to the high corruption (political parties and government corruption), since the heart of the problem lies at the institutional level. It is recognized that despite the solid and coherent rules, regulations and legislations that now exist in the Balkan countries, the main problem lies in their implementation. Hence, it is concluded that promoting transparency at the institutional level, as well as advocating free and uncensorsed media and efficient and independent judiciary should constitute the key pillars in fighting corruption and informality.

The corruption, all speakers finally agreed, is here to stay – it cannot be eliminated. Nevertheless this reality fact must not serve as a defetist argument against action because, as they all concluded, corruption can be tamed.