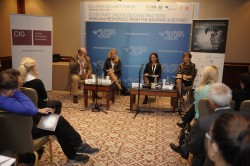 This session, organized in cooperation with the Council for Inclusive Governance, focused on the human security in Kosovo*.

The speakers explained the situation in Kosovo*, problems that people face on the everyday basis and a position of human security issues on the political agenda. One of the speakers described Kosovo* as a poor country in a poor region, with problems in all aspects of human security, with no clear European perspective and a high unemployment rate. However, Kosovo*’s institutions, as well as Kosovo*’s political elite, focus on political issues and the dialog with Serbia exclusively, with little or no regard to the problems that affect all ethnic groups. All the speakers agreed that it is crucial for Kosovo* to bring human security on the agenda and that all parts of society should take part in it.

Another issue raised on the session was the situation in Northern Kosovo*. The opinion is that challenges, such as unemployment, poverty as well as a low quality of social, health and education system cannot be solved through just canceling parallel institutions, but the belief remained that it would be possible to find other answers for difficult security issues.