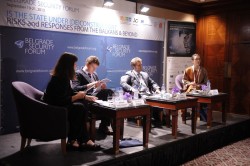 Second panel of the Academic session focused on the question of transformation of security professions in the Balkans.

Discussion at the second panel was focused on the question of transformation of security professions in the Balkans. The panel was chaired by Milada Anna Vachudova, associate professor of political science at the University of North Carolina at Chapel Hill.

Cvete Koneska, senior research fellow at Analytica Skopje, argued that the practice of Macedonian police has changed only slightly even though the normative framework has changed substantialy. She said that only significant change occured in the practice of border policing in the aspect of regional cooperation. She highlited that lower level of  police, or „front liners“ as she calls them, are more affected by norm-implementation, than those segments of law enforcement that are closer to the center.

Arjan Dyrmishi, Head of the European and Security Research Department in the Institute for Democracy and Mediation in Tirana, analysed the modernisation of the Albanian diplomatic practices, stressing that the influence of communist legacy is still strong, but that it is also evident that international factors also affect the professional identity of Albanian diplomacy.

Johnathan Marley, serving officer with the Irish Defence Forces and a PhD candidate at the London School of Economics, spoke about new model armies in the Blakans and the rethinking of military purpose in the region. He argued that there is a significant deficit of knowledge and expertiese in civil-military relations.
Post-conflict aura is slowly giving way to integration – through various institutions such as NATO, EU.
The state is dominated by a result orientated perspective. The civilian understanding of military function is mostly that of general acceptance. The national identity and the sense of “ownership”, as he put it, are products of the military contribution to nation identity building. It is his belief that we need to make room for new military identity. While these steps could be closely associated with NATO and EU (on an integration level), they widely depend on the motive a particular state has. Today integration itself is a motive, but it could be better and more productive approach to see integration as a means to an end.