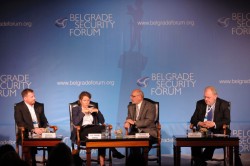 Second panel sought to answer questions what changed in the security environment since the Helsinki conference? What are the main contemporary security challenges? What can OSCE do about it? What are the priorities of Swiss presidency in the next year?

The panel saw a lively discussion between Heidi Grau, head of the OSCE Chairmanship Task Force of the Swiss Federal Department of Foreign Affairs, Adam Kobieracki, director of the OSCE Conflict Prevention Centre, Andrew Michels, Senior Security Sector Advisor and a professor of international relations, and Richard Thompson, a director of T-Media who moderated the discussion.

At the start, answering to what changed since Helsinki 1975, Grau said that today we have more connectivity and globalization, also a growing body of norms, commitments and principles, and that, today more than ever, (in)security of one state affects security of all states around them. „Connectivity of risks needs connectivity of answers“, Grau concluded. Kobieracki pointed out that the biggest change since the founding of CSCE/OSCE is far-less inclination of the member states to accept of the OSCE’s interventions in their internal affairs. He stressed that all of the member states act in this way. Michaels said that the emergence of terrorism as a serious global threat might have made OSCE and NATO evolve in some unforeseen ways – „Confronted with challenges all the time, their (OSCE and NATO) responses define the organizations themselves“.

As for the Swiss OSCE presidency priorities, Grau said that the priorities will be focusing on the reconciliation process by putting more pressure to the implementation of existing plans that address problems of isolation, hate speech and hate crimes. Also, one of the primary focuses will be on the OSCE itself. The overall goal of the Swiss presidency is to try to reverse the trend of mistrust between East and West.

In the segment where moderator conducted a live survey with the audience, by giving them to choose between several security challenges one that will be most serious in the future, we saw interesting results. Cybersecurity threats that could result in a „Big Brother society“ took the first place among the feared scenarios, just before the socio-economic collapse.

This led to the discussion about the changing nature of the definition of security. Grau agreed that OSCE still clings on the more traditional concepts of security, those focused on states. Michels continued by saying that the states need to be more aware of personal threats that endanger dignity and human rights. „OSCE will never play the same role as it did in the past – the world is changing and we need to adapt to the new environment. Role of the OSCE is also to maintain confidence in the security policy, and keep protecting human rights across the board and, lastly, to remain a presence in this field, albeit not in its current form“, Kobieracki concluded.