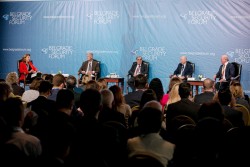 The participants of the third Panel named The Crises in Ukraine Lessons (not)Learned from the Western Balkans, have agreed that there are no parallels to be drawn between the situation in Ukraine today, and the previously experienced situation in Kosovo.

The chair of this panel,Ā Vessela TchernevaĀ has opened the discussion by asking whether the situation in Ukraine could be compared to the experiences in Western Balkans and by firmly pointing out that the only thing that Russia wants in Kiev is the veto power.

Andrei ZagorskiĀ has said that although there are no similarities between the case of Yugoslavia and Ukraine, some important messages can be defined and used as possible solutions for the future problems. Answering the questions from the audience,Ā ZagorskiĀ has also underlined that in his opinion if Ukraine would have regained control on its border if it had adopted the constitution on time. However, he added that now there is no other solution but to extend the timeline.

Ted WhitesideĀ has stressed out that the only similarity between Ukraine and Yugoslavia is the missed opportunity. Historical context is different, namely that there was no such strong involvement of social media and propaganda that heavily affects the path of the conflict.Mr. WhitesideĀ has also pointed out that a Ukrainian crisis is not a NATO versus Russia conflict, but a fight for protection of international law and democracy. And most importantly, he underlined that the NATO base in Ukraine is ready to offer full help to the Ukrainian Armed Forces in order to improve and be better prepared at the border.

Andriy VeselovskyĀ has pointed out the difference between Ukraine and Yugoslavia in terms of history, geography, ethical and religious aspects. He has also mentioned that there is no inherited hate present in Ukraine and Russia as it was a case in the Western Balkans. FinallyĀ VeselovskyĀ said that Russia, especially from an economic perspective, cannot afford one more frozen conflict.

James SherrĀ continued the discussion by firstly stating that the conflict in Western Balkans was preceded by massacres, and that this is by no means similar to the situation we are facing in Ukraine now. Moreover,Ā Mr. SherrĀ emphasized that Russia sees this conflict only as a conflict with NATO and not as a conflict with Ukraine.

Towards the end of the panel, the chair has raised a question of Russiaās involvement in Syria and its impact on the continuation of the Ukrainian situation. The panelists have agreed that the comparison of the two is not possible as two different things are fusing these conflicts: Syria had a dictatorship regime while the conflict in Ukraine is driven by a conflict of values.