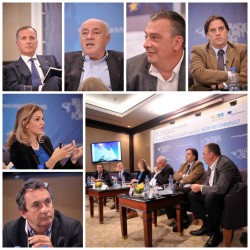 The clash of interests that emerged almost a year ago with protest in Kiev’s Independence Square has become a threat for the Ukraine, Russia, the European Union and potentially the whole broader region. Concerns were made over the possible threat for the other areas inhabited by Russian population, not just in Ukraine, such as some parts of Estonia. It was also stated that general population in all countries is tired of fighting and that both sides have to change their approach in order to solve the issue.

Mistakes were made by both EU and Russia in the past. The EU was not supposed to counter Russian interests, while Russia violated international law by not respecting Ukrainian integrity. The crisis was a result of many factors, such as poverty, corruption, and weak democratic institutions of Ukraine. Fear of losing power and lead role in Russia and beyond is evident.

Analogy between the conflict in Yugoslavia and the ongoing crisis in Ukraine was not visible to all panelists. The question about the criteria for intervention and introducing sanctions nowadays was raised.