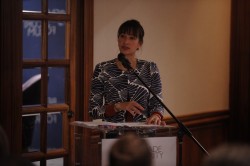 In Academic session keynote speech Mai’a Cross discussed epistemic communities – transnational neworks of experts – and their influence on the EU integrations in the area of security.

During the keynote speech Mai’a K. Davis Cross, Senior Researcher at the ARENA Centre for European Studies in Oslo, spoke about the epistemic communities – transnational neworks of experts – and their influence on the EU integrations in the area of security. She argued that the epistemic communities are the real force that moves the integrations forward. By analysing two case studies – the COREPER and the EU Military Committee (EUMC) case studies and the nature of their operation and decision making – Coss pointed out that epistemic communities differ from official governing groups by having higher degree of internal cohesion and, very often, common policy goals. The prevalent opinion within these groups is that “it’s a myth that policy occurs in capitals – it is formed informally”.

The analysis of the epistemic communities shows that borders between official government and informal CSO decision-making in the sector of security are thinner than previously thought. The security integration is being formed beyond the official intergovernmental cooperation processes. The results argue that flexible experts achieve more for policy in their informal meetings than the rigid formal institutions.