Experiences of Western Balkan countries in improving civilian capacities were subject of the talk at the Special Side Event Civilian Capacities for Peace Operations – Case of Western Balkans. Many of the countries are post-conflict societies which seem ready and eager to become peace providers. 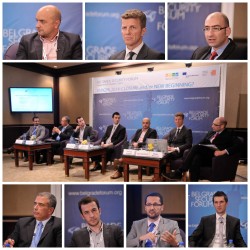 Discussants concurred there have been many advantages in including civilian personnel, such as police officers, medical staff, or judiciary experts in such missions. Nevertheless, Western Balkan countries did not increase civilian capacities as they could.

Apparently, most countries have a legal framework for participating in peace operations while some were seriously working on defining their own. However, having the legislation did not automatically mean the framework is effective. Therefore, many countries are searching for new legal solutions in order to strengthen and broaden civilian participation in peacekeeping operations. The traditional culture was pointed out as one of the obstacles in changing the role of civilians in these missions.

Public still believed such missions had been in the purview of military and they are not fully grasping the importance of civilian personnel in such missions. Moreover, political will is a strong incentive which would initiate involvement of civilians in stability and governance building aspects. In addition to political initiative, improvements are required in pre-deployment education and financing of operations. Consequently, certain resources need to be redirected, in case additional civilians are involved. In the end, joint efforts in combating springtime Balkan floods were mentioned as a nice display of cooperation and civilian involvement.