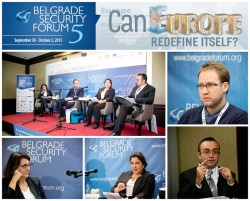 At the panel When Nations Move – The Failure of Migration Policies one specific question was raised: how come when people fleeing from war migrate to Turkey or are drowning in Mediterranean see, Europe calls them refugees, but when they come to European territory they are suddenly becoming economic migrants?

When discussing failure of migration policies, panellists’ firs and main impression was the European unpreparedness for the current crisis. For a long time, and we can speak about decades, European leaders pretended that this is an isolated problem of Middle East, and unjustifiably missed to foresee coming emigrational trends.

The panel participants stressed out that EU leading members had difficulties, or lack of willingness, to comprehend Greek warnings when addressing its own experience with refugees’ influx in previous period. That consequently led to current fragmentation among European countries especially evident at the last week ministers’ meeting where four countries (Ukraine, Romania, Slovakia, and Hungary) opposed the plan for relocation. Nevertheless, application of Qualified Majority Voting, which allows decisions making without consensus, in this situation is assessed as a step forward towards the Europe that doesn’t live in its own bubble, but has a sense of reality.

Besides awareness raising, Europe must establish a common governance asylum seeking system. Under current circumstances there is only set of incoherent norms that are not giving effective results. When refugees come to first EU country and have to register and seek asylum right there, Europe is not opening its door for them, but actually closing 27 other counties’ doors. Consequently, this kind of system is not encouraging refugees to obey the rules.

In order to explain the proportions of refugee crisis some numbers were pointed out: approximately one half of Syrian population is either internally displaced, or fled to foreign countries. They are now one fifth of global refugees’ population. Having that in mind we all as humans need to understand their suffering and help them integrate in our societies.