The key note speech of the second day of the Belgrade Security Forum was delivered by the Prime Minister of Serbia, Mr. Aleksandar Vučić. In his address Mr. Vučić stated that the EU represented the best possible choice for Serbia. Even though EU officials stated after the Berlin summit in August 2014 that there would be no enlargement in the next five years, Vučić said that Serbia will continue with the reform efforts not allowing the enlargement fatigue disappoint it. “We will not lose a single day in making Serbia a much better country than it used to be”, said Prime Minister. In order to make changes, we have to change our mindsets, he continued. 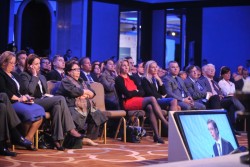 Prime Minister saw Serbia as the pillar of stability in the region and said that it would not be going after the leadership position in the region. “We do not need leaders in Western Balkans, but cooperation and collaboration between countries, more infrastructural projects and connections between people”, said Vučić. He announced the set up of the Association of Youth of Western Balkans as a platform to build trust and better understanding among new generations.

In addition, he said that Belgrade-Pristina relations did not represent the biggest issue in the Balkans. The government of Serbia was making efforts to establish good Serbian-Albanian relations and therefore Prime Minister announced that he would host the Albanian Prime Minister in Belgrade for the first time. He expressed concerns regarding Bosnia and Herzegovina, but repeated that Serbia would respect and preserve the integrity and sovereignty of BiH, including sovereignty of the UN countries such as Ukraine.

Lastly, Prime Minister underlined that Serbia stood as reliable partner, both for countries in the region and the EU.