Panelists of the first Session of the Belgrade Security Forum titled Democracy’s Responses to Populism and Internal Radicalization agreed that Europe is faced with many challenges: rise of nationalism, skepticism, not being able to cope with migration challenge.

All this elements need to be closely observed when talking about rise of populism and speakers were particularly careful to offer solutions to the issues underlining its complexity. 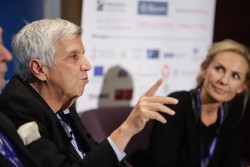 There were opinions that populists were only using refugee crises as armor for their cause and that the cause for people voting right was their feeling of disappointment in institutions and establishment. Main political parties were not able to respond adequately and satisfactory.

The most important backdrop to all of this is also the notion of unraveling of European Union project after Brexit. Speakers have been saying that EU was maybe dealing more with Brexit than migration, and that we needed more common policies on the EU level to avoid countries individually tackling migration crises.

Participants paid special attention to necessity to find new economic model that would be integrative to both refuges and people that were afraid for their prosperity. Finding right economic model and better handling of migration crises can be one of the ways to stop the rise of populism.

Panelists also discussed radicalization of Islamic extremist giving in this way a round up with domestic and foreign elements that can be a potential treat to security.