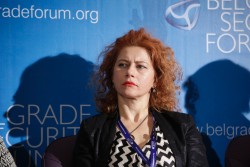 The panel “Reinventing Walls and Fortresses: Human Rights in The Age of Migration” saw four speakers give their presentations on topics related to the ethical issues of European treatment of migrants in recent years, and strategies for fixing these issues.3

Ms. Caron spoke on the topic of readmission agreements, and the problems that arise from. She noted that safe third-country clauses are inherently problematic due to false assumptions. It is assumed that refugees would be treated humanely in the country they are sent back to, which, in practice, is often not true. Using the Spain-Morocco readmission agreement as a case-study, Caron said that the majority of the migrants sent back are sub-Saharan migrants stuck in limbo, unable to continue their journey to their destination, but also without the proper paperwork to return to their home. To offer a solution, she argued that the international community must not rely on NGO’s to ease the symptoms, and must make lasting policy change to properly share the burden.

Ms. Šelo Šabić focused in on the reactions of four countries internal political climate in response to the migrant crisis, and how that affected each countries actions. “Serbia and Croatia had a strong humanitarian reaction to the crisis, while Slovenia and Macedonia both took a harder stance on security over humanitarianism”, she claimed. This is due to Croatia’s and Serbia’s individual experiences in terms of dealing with large amounts of refugees in their land during the 1990’s, and also many of their personal experiences as refugees in the 1990’s. Macedonia, meanwhile, did not try to handle the problem until it was out of control, at which point they cracked down aggressively. Slovenia’s place in the EU saw them politicize the situation early on, not wanting to “compromise Schengen values.”

Mr. Wilde took on the ethical dilemma of non-refoulement, and how implementations of European human rights law represented its part in the refugee crisis, but as cause and as solution. Noting that after sea rescues of refugees, the rescuing country is thus responsible for the refugees safety even after the rescue, it causes catch-22 between committing to sea rescues, thus being responsible for the migrants even after the rescue, and creating an incentive to try risky water passages that law spurs. Wilde said that just because another country is responsible for the situation that created the refugees, the rescuing country is not off the hook totally. He also noted that the rescuing European countries can be perceived as at fault for unstable political situation in the Middle East that has caused the migrant crisis, and in turn is admitting a small amount of guilt by continuing this practice.

Ms. Mitrović looked in-depth at the Common European Asylum System’s failures under the pressure of the recent migrant crisis. “The system’s implementation resulted in a prisoner’s dilemma game, where each country would only have the bare minimum reception conditions to convince refugees to try their luck elsewhere”, she noted. This reluctance to share the burden has become a problem internally, as the scheme to relocate the roughly 160,000 migrants in Italy and Greece to the rest of the EU has seen only about 4,000 actually relocated half-way through the allotted timespan to complete the relocation, lamenting that when the first countries to close their borders saw no consequences, a bad precedent was set and followed by the rest of Europe.