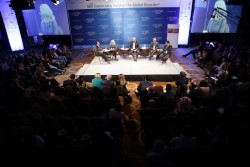 The second session of today’s Forum was dedicated to the Belgrade-Pristina Dialogue and the EU future. Throughout the panel, the moderator, Alex Roinishvili Grigorev, stressed the tough issues and the importance of sustainable solutions for future progress of relations between the two countries..

Hiccups in the normalization process between Belgrade and Pristina have been present as today’s Panel also demonstrated through the absence of half of its panelists. It is crucial that for future progress and involvement of both countries emotions should not interfere with the dialogue.

Naim Rashiti was attempting to propose a solution for facilitating the normalization process in order to achieve improvement of living conditions. His main argument was that both sides have to continue the talk regardless of their differing views. Although a lot of relevant time was lost last year, the dialogue should continue in favor of the citizens of Serbia and Kosovo. Hence, it is of utter importance to satisfy the needs of the population. We need to engage structural society, include the broader public and respect the importance of the encountering issues.

Tanja Miščević pointed out that it is a common understanding of Serbain government that the EU is the goal and the instrument to that goal. What is extrremely important is the continuation of the negotiation process. It is of tremendous impact to enable the expression of both interpretations, because only in that way, we can unable the difficulty of another side jeopardising the rules. The victims do not have names and war cries on both sides should be prosecuted, if we want to go further.

Gordana Čomić believes that political elites have forgotten that politics should be about people and their living conditions. They forgot to care about the human rights.The populations do not feel they are moving forward in evryday life and they do not see the results. The main emotions are uncertainty about the future, the lack of satisfaction, unhappiness, frustration. They are not able anymore with the unresolved isssues. Last but not least, the Brussels agreement should finally be recognized as “our” agreement.

Pierre Mirel acknowleged that the Brussels agreement cannot be considered a “love-affair”. Instead it has to be understand as a very pragmatic approach by two Prime Minsters which thereby showed bravery. We should have in mind that both parties are tremendously benefiting by this dialogue which will help to advance their integretion into the European family. It’s a political and identity choice which can be used as an instrument if Belgrade and Pristina share the same objective. Therefore, long-term interests have to prevail over shorter gains. Any bricks in the dialogue or unilateral decisions will only harm further process, create more frustrations, increase nationalist views and ultimately make it more difficult to find joint solutions. Mirel finished his talk with suggestions on disputed issues, methods of dialogue, actors and the EU.

In order to fight the current deadlock in dialogue, the moderator suggested that thoughtfulness over emotions is the key to future development. Not only is strong leadership needed, but also the understanding that combating “old habits” will bring prosperity.